TRANSIT, my play based on the book of the same title by Anna Seghers, first performed in 2015, will have a short revival in March 2017. Note the dates:

Two days after opening night , August 28, 2015, Chancellor Angela Merkel opened Germany’s borders for the flood of refugees desperately fleeing the violence in Syria, other Middle Eastern Countries and Africa, purely on moral grounds: Merkel reminded her countrymen and -women of their own history of 75 years earlier when, in WW II, Jews and Hitler’s political adversaries had to flee Germany for fear of persecution. They couldn’t live any longer in the country where they were born and wanted to work, to study, to love, have a family. It would be inhuman to refuse these refugees entry into Germany, just as it was a gesture of humanity of European countries in the thirties to open their borders for German refugees. This grandiose gesture of the Chancellor soon was followed by a political crisis which lasts till today. Merkel’s decision provoked a strong political reaction, out of fear, to keep the refugees out. In 2017 political parties have appropriated the fear of the people, they own this controversy and fight it out in elections. Many don’t want strangers, refugees don’t feel welcome. This has become a European and worldwide trend.

The play TRANSIT has gained an unexpected new actuality. Not so much because of its political aspects and implications, but because of its humanism: the political context of Jews and Communists in France persecuted by the invading Germans in 1940 is different from the ideological backdrop of today: Jews would be Muslims, Communists would be Terrorists, ‘adversaries of the regime’ would be ‘economic refugees.’ But the situation is similar: what happened to the German refugees in France, happens today in Germany and Europe with the refugees from Syria: they are sent back, have to move on to other countries, or they have to hide.

TRANSIT is about people who have to move on, while they thought they had found a safe haven in France. Anna Seghers was one of them. In her novel she follows the fate of the people she met on her flight – their plight, their fears, their desires, their desperation, their cunning, how they could save their skin, how they could get from Paris to Marseille, how they had to deal with the bureaucratic hurdles to get the right papers, how to get food and money to buy a ticket for the boat that would bring them to the ‘free world.’ The characters in the book and in the play are individual people, who fight for themselves, for their naked existence, they are people who want to live, work, study, love, just like today’s refugees. Sometimes they loose everything they have on their way, sometimes even their lives. TRANSIT is about humanity beyond politics.

TRANSIT is a collaboration between Theater Willy Praml and Wu Wei Theater, both from Frankfurt a.M, with Dutch director and writer Paul Binnerts. 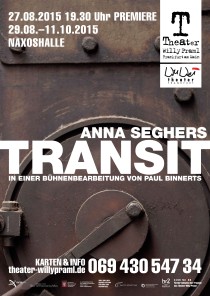 After a successful Acting in Real Time workshop for NYU Berlin, 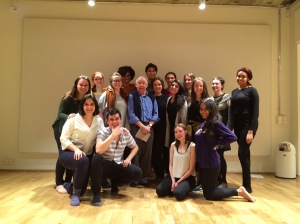 All information about these workshops as to WHO, WHAT, WHERE and HOW to book, can be found on our new website: http://essenceandpresence.com

We started our workshops last year and we were encouraged by the response and the accomplishments of the participants in this exciting event to continue. We have been doing a lot of work lately, together with our collaborators on the ground Greg Taubman (who created our brochure) and Chie Morita in New York, in LA Diana Wyenn (who created our website), Lizi Watt and Kestrel Leah (of Paloma Street Studio in LA, and Kristin Olson in Portland.

This Spring we hope to attract again a group of enthusiastic and talented people: actors, dancers, singers, performers in the broadest sense, directors and choreographers, and as we have experienced, they don’t have all to be professionals.

Coming summer I will be teaching another Acting in Real Time workshop for NYU Tisch Summerschool in Amsterdam, and Nancy and I are teaching for the Amsterdam Theater School/ATKA in August/September. 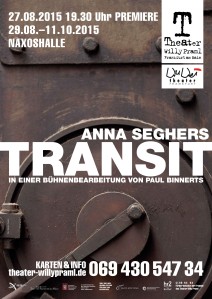 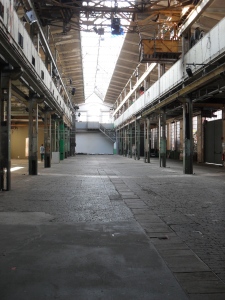 Rehearsals TRANSIT well under way: two and a half weeks down, four weeks to go, première August 27. While the Germans – and other European countries – are acting in real time on the burning refugee issue, the actors of TRANSIT are trying to ‘act in real time’ on their own refugee issue of 75 years ago.

Looking for maps of Paris 1940, I found this on Moopenheimer’s Museum:

Commissioned by old friends of two theater groups in Frankfurt (Germany) – Theater Willy Praml and Wu Wei – I have been working, since September 2014, on my new play TRANSIT, based on the novel by Anna Seghers. I finished the first draft on May 1st. It’s my first play written in German. Now I will direct it.

Subject: German refugees who have escaped the Nazi’s in their own country, then have to flee for them when the latter occupy France, May 1940. Via collaborating ‘Vichy France’ they desperately try to find a way to get to the ‘free world.’ For that they need visa: entrance visa (for the USA, Mexico), transit visa (for the countries they need to travel through in order to reach their destination), exit visa (out of France), and a million stamps from the french authorities. Marseille is the last open port, there are only a few ships… there are more refugees than inhabitants of the city, food is rationed, secret police are everywhere. In the melée of thousands of desperate people we see how some individuals try to escape… some succeed, some don’t… and there is a tragic ending love story.

Rehearsals of TRANSIT have begun Monday May 18th with the reading of the first draft of my play. In the following days I have edited the text into a performable play, read the text twice with the actors, and cast the actors into their roles (22 roles for 9 actors).

The performance, with dance and video will be in the Naxoshalle, an impressive ‘industrial cathedral,’ built before the Great War in 1906. It was taken away from their Jewish owners after the Nazi’s had come to power, starting on August 27th. 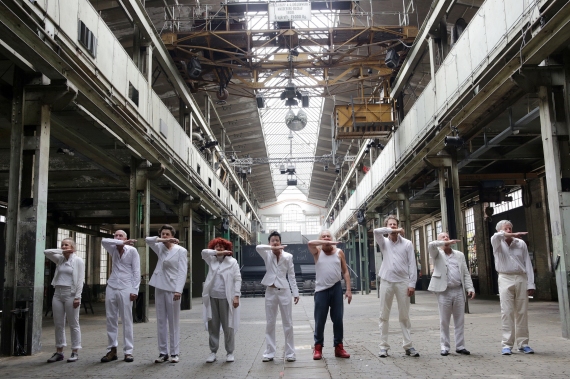 With these two photo’s of the first dance rehearsals with our choreographer Heike Hennig from Leipzig, I proudly present the group of actors in the Naxoshalle, 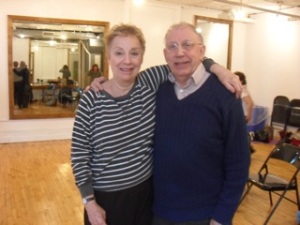 The first of three workshops ACTING FROM THE BARE ESSENTIAL: YOU! in New York, March 13-15, was a great success. Here are a few quotes from participants and photo’s of the work: 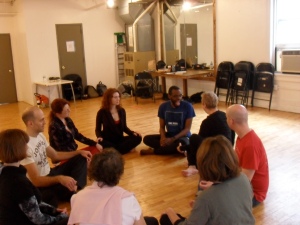 “… workshop is Outward Bound for actors. I was pushed to my limits and changed.”(Nancy Graham)

“If you have the chance to study with Nancy and Paul – TAKE IT! Their workshop was transformational and left me with rich material for further growth and exploration both in performance and in life! Recommended!” (Sean Kaminsky)

“Working with Nancy and Paul is like being in the room with Joseph Chaikin and Bertolt Brecht at the same time. Their training builds on these traditions to craft a profound, moving, and meaningful synthesis of the mind, the voice, and the body. By the end of the weekend I felt vulnerable, validated, emptied, empowered, and above all: present.”   (Greg Taubman)

“The workshop was a completely beautiful, loving, experience. Nancy & Paul work in tandem as they lead the way into storytelling with creative aliveness filled with technical clarity, exercises both simple and multifaceted. Being seen, acknowledged and challenged to the next level is the thrill of working with these master teachers. I’m eager to participate again.” (Shelley Hainer)

“Nancy Gabor and Paul Binnerts are the real deal.  They bring tremendous talent, heart and care to their work. Participating in this workshop brought me home to who I am as a creative artist and most importantly, as a human being. Don’t miss this. It’s a gift.”  (Jill Van Note, Actor, Coach, Feldenkrais Practitioner)

Check our poster for all the workshops 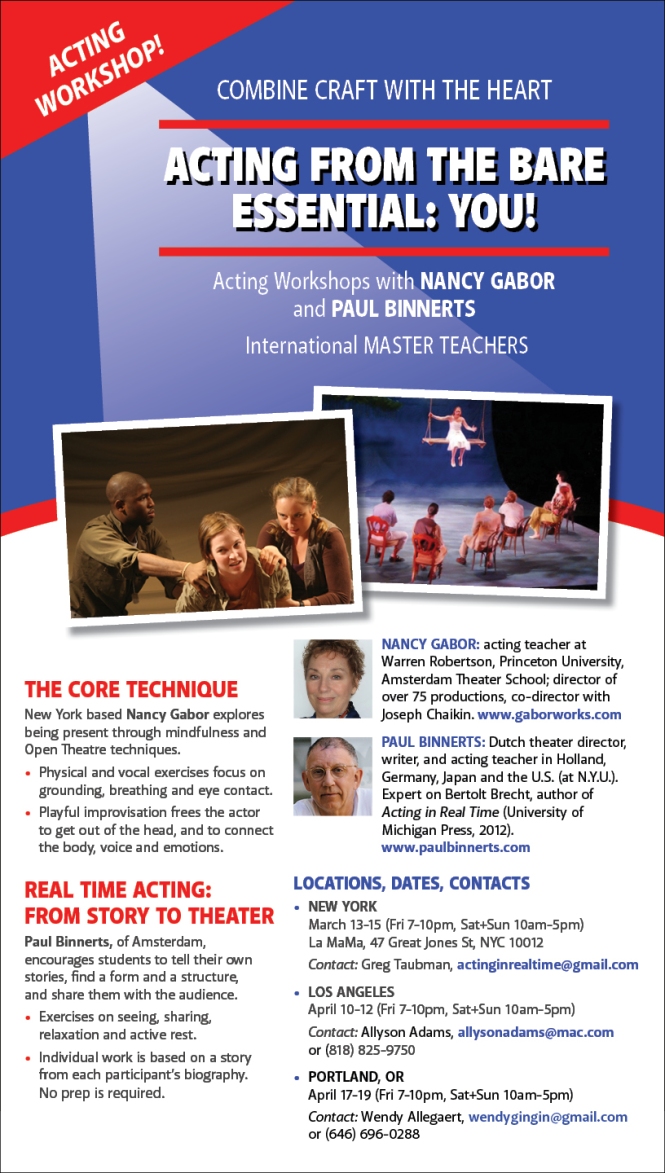 One of the inspirations for my work as a director and an acting teacher has been the work of Bertolt Brecht, many of whose plays I’ve directed, and whose ideas about the ‘epic theater’ put me on the track of my own exploration of acting, which eventually led to the concept of ‘acting in real time.’

I discovered the real-time actor for the first time, while directing The Measures Taken, one of the most controversial plays by Bertolt Brecht, in 1971/72. Among many other things, we discussed the role of the composer/musician Louis Andriessen in the performance: should he stay while we were performing the scenes, or should he exit and return to the piano, which was positioned central stage, any time we were going to sing a song?

We decided that he should stay and watch us perform. But what were those of us doing then, when the others were singing – exit, or watch? Watch, of course. And who were we then when we watched? The characters we played? Or ourselves? Ourselves, of course. But to be our selves just like that, wasn’t so easy, knowing that we were being observed by an audience, and used as we were to the ‘illusion of the stage,’ symbolized by the so-called ‘fourth wall.’

We needed not only to be aware of this position, which at first felt very uncomfortable, but we also needed a technique to ‘break the illusion’ of the stage. We took our cue from Louis: musicians play their instruments, and when they don’t play, they look at their score, at the conductor, and at their fellow musicians, their instruments the ready for the next cue. They don’t pretend – what they do is real. Actors can be like musicians, who play in ‘real time.’ But they need a technique to do so, tools to see them selves as the instruments they play, the play as the score, the performance as a concert, and their fellow actors who are playing their roles… and often times just are watching.

Real-time acting is a new convention and a new acting technique for postmodern theater: the actor is the intermediary between the performance and the audience: as himself he/she tells the story of the role he plays in the here and now and the reality of the stage. His/her presence on the stage makes the actor into the author of the performance he/she plays his role in. The real-time actor acknowledges the audience, and communicates directly with him. In real-time theater, what is ‘real’ is the acting, the stage, the audience, and the theater itself, not what is acted, nor the illusions maintained in the play and on the stage. The real-time actor creates “the reality of the illusion, not the illusion of the reality.” The convention of real-time acting is non-realistic and non-illusionistic.